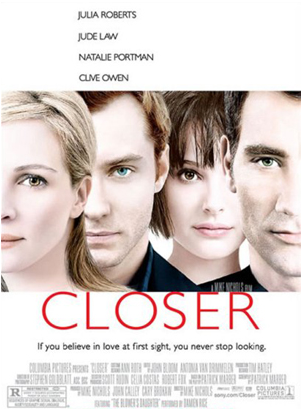 Dan (Jude Law) is a writer in London who wants to finish a novel, but in the meantime supports himself by writing obituaries. One day he chances upon Alice (Natalie Portman), a beautiful young American expatriate, working as a stripper, when he sees her get hit by a car. Alice immediately falls for Dan, and gives him her love without reservation. Dan is initially enchanted with Alice, and returns her affection, but while she inspires him to write his novel (based on her life), her neediness begins to wear on him. Anna (Julia Roberts) is a photographer who is hired to take a portrait of Dan for the dust jacket of his book; Dan is attracted to her easy confidence, and while the two of them flirt, Anna soon (inadvertently through Dan’s playful machinations) meets Larry (Clive Owen), a dermatologist, and marries him. Dan can’t get Anna out of his mind even though she’s married, and the two become lovers, but Dan is frustrated by the fact that Anna is reluctant to leave Larry for him.But it doesn’t really end well for either.