During the shooting of the catalog for one of my clients I photographed the work one of my favorite artists: Walasse Ting (Shanghai, October 13, 1929 – New York, May 17, 2010)was a Chinese-American painter. He left China in 1946, lived briefly in Hong Kong  and settled in Paris in 1952. There he met Karel Appel, Asger Jorn and Pierre Alechinsky. In 1957 he went to America and settled in New York, where his work was influenced by pop art and abstract expressionism. From 1989 he lived alternately in New York and Amsterdam, where he and Appel had a studio. In 2002 he became comatose after a stroke, after which he was placed  in a nursing home in Amstelveen. Two weeks before his death he was  moved to New York by his children, where he died at the age of 80.
Ting worked with acrylics on rice paper. He painted mostly half naked women who were surrounded by birds, cats and other animals. His work hangs in major museums throughout the world, including the Stedelijk Museum in Amsterdam.Enjoy his work. 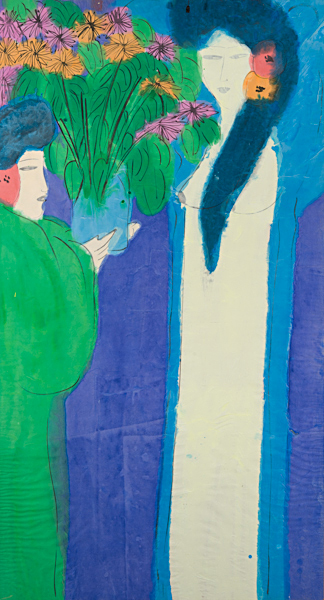