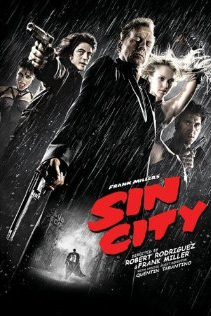 Sin City is an adaptation of the comics of Frank Miller by the talented director Robert Rodriguez (El Mariachi, Spy Kids). The camera angles and the lighting are different from other films and the cartooncharacters are real (see the photo above to see how close Rodriguez approached the comics!) The film has the same atmosphere as the comics. Dark figures in a pool of murder and destruction that seems to be called Basin City.

Almost the entire movie is in black and white and hard lighting. But now and then, a character have colored eyes, he is completely green or bleeding in white,red or yellow.case.  And beautiful it is! Sin City is a feast for the eye, the relatively hard images (there is such a person eaten by a dog) the special lighting (you see hard light coming from the side and the back as rim) and the classactors playing character roles the good ones and the bad ones . Nevertheless, it is now and then so extreme  to swallow. You will immerse you in the gloomy, dark city below and you almost begin to believe in what happens there is for unbelievable. The plot would be impossible to tell. These are three (or maybe four) separate stories that take place in the lake of perdition from the title. Bad guys and the very bad bad guys fight each other with much violence, excessive saber rattling and screaming clothing. Sin City wins again in atmosphere . See it and enjoy !!