Joe McNally and me 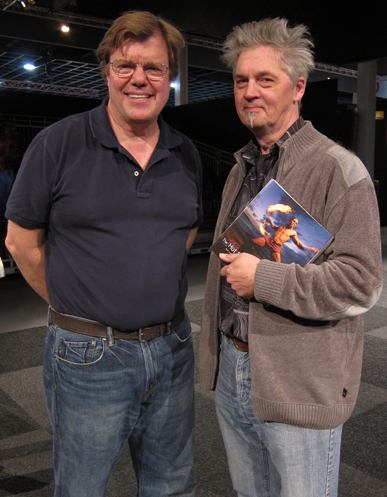 Sunday, November 28, 2010, I went to Zoom Experience  in Utrecht (The Netherlands). A big event with different companies and different workshops. It was bigger than previous year and certainly recommended to those who are dealing with photography.
New products and software were produced. Some students of mine were also present and I’ve gave them more information about the accessories that they wanted to buy. Photobags, reflective screens, expodisc, tripods, graycards, you name it. Xmas and New Year are not far off! At the end of the day, this is what I’ve been waiting for, the workshop with Joe McNally. One of my favorite photographers. In the Nikon theater he played with different lighting setups with Nikon Speedlights. The SB900 and SB800 were present in large numbers. And of course the D3x. In a simple, clear and funny way he led the audience from one level to another. Starting with an open flash, a reflection screen as diffuser, a second flashunit as rimlight. In the following setups more flashs and he also  placed  gels on the strobes. Yellow and blue. Crossed over eachother. In the background four flasunits directly to the camera,the audience was holding them. Fascinating!
Everything was controlled from the camera served as Master. The other flashes were all placed in separate groups. Each group had its own parameters. The flashs was measured and adjusted through the Nikon TTL system. Afterwards, my colleague Marc bought the book “Hot Shoes Diaries” and Joe signed it and I, I was on the picture with Joe McNally. Thank you Joe for the interesting workshop. Thanks to Marc Poelmans who made the picture.
(Visited 27 times, 1 visits today)