BLOW UP (1966)- Directed by Michelangelo Antonioni with David Hemmings, Vanessa Redgrave and Jane Birkin. The film won the Palme d’Or at Cannes in 1967. 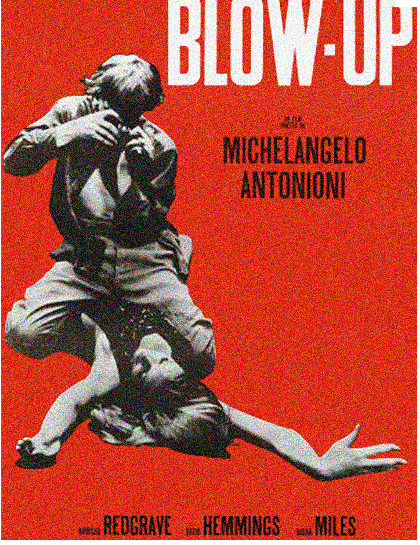 In London, the 1960s: Thomas, a fashion photographer, after a photo essay on the homeless, spent a morning in a park and attracted by the light takes pictures. The place is almost deserted, except for a couple kissing, Thomas photography further. The woman, Jane, finally realizes his presence, and very disturbed, calling him the negatives, but Thomas absconding. Jane finds it in the afternoon, and will offer up to him: Thomas gives a film, but that is not good. He developed the photographs of the park, and directed by successive enlargements (blow-up means “expansion” in English) that he actually witnessed a murder. He goes at night to the scene and discovered the corpse as he showed his photographs. Returning home, he found his empty studio: all their photos and negatives were stolen. Distraught, he seeks advice from his publisher and friend, but in vain. At daybreak, he returned to the park, only to discover that the body has also disappeared.

The film caused a scandal at its release in Britain: it was the first time we appeared in a British film completely naked female body (in this case, that of Jane Birkin). Five minutes were also cut by the Argentine dictatorship of the Revolution.The musical group The Yardbirds (including Jimmy Page and Jeff Beck) made an appearance in a scene at the end of the film.As a tribute to Blow Up realized that Brian De Palma Blow Out in 1981: John Travolta sang a sound engineer who recorded the scene of a car accident that will prove to be a murder …Thomas’s character was inspired by Antonioni’s photographer David Bailey.