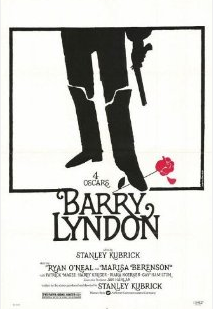 Okay, who out there has an f 0.7 lens?  Well, among still photographers no one I know has such a treasure and even in the richly financed movie industry, such an extraordinary piece of glass is very rare, possibly limited to just one – the one director Stanley Kubrick used to film the lingering candlelit scenes in Barry Lyndon.  For these moments, Kubrick had a 50mm lens built for NASA by the Carl Zeiss Company modified with a Kollmorgen adaptor used in still cameras.  No artificial lighting was used with all the illumination coming from the candles.  The warm light generated by the candles creates a compelling painterly look that is reminiscent of Thomas Gainsborough and other artists of the era in which this movie is set.

The movie focuses on the exploits of a scheming Irish rogue who wins the heart (and fortune) of a rich widow and makes a sideways entrance into 18th century aristocracy.  There are some powerful battle and dueling scenes but it is the candlelit scenes and meticulous composition that hold visual sway for photographers.  The frame is often held and the action allowed to develop within it.   Often landscapes rather than people dominate the screen.

The film runs 184 minutes.  In those three hours and a bit, I counted at least 22 scenes I would like to have recorded with a still camera.  It is impossible not to watch this movie and not want to indulge in some portraiture of your own employing candles, perhaps employing a few reflectors to spread the light.